Yesterday we spent the entire day at The Critchlow Alligator Sanctuary in Athens, MI. We heard about The Alligator Sanctuary a couple summers ago when we took the kids there. Bella is completely obsessed with alligators and finding out that we didn’t have to travel to Florida for her to see something she loves, was amazing. While we were there two years ago, they told us about how people could come back in the Spring and help get the gators from the warming shed (a greenhouse) and take them to their summer swamp. We were not able to go help last spring, but we went yesterday and Bella had the time of her life! 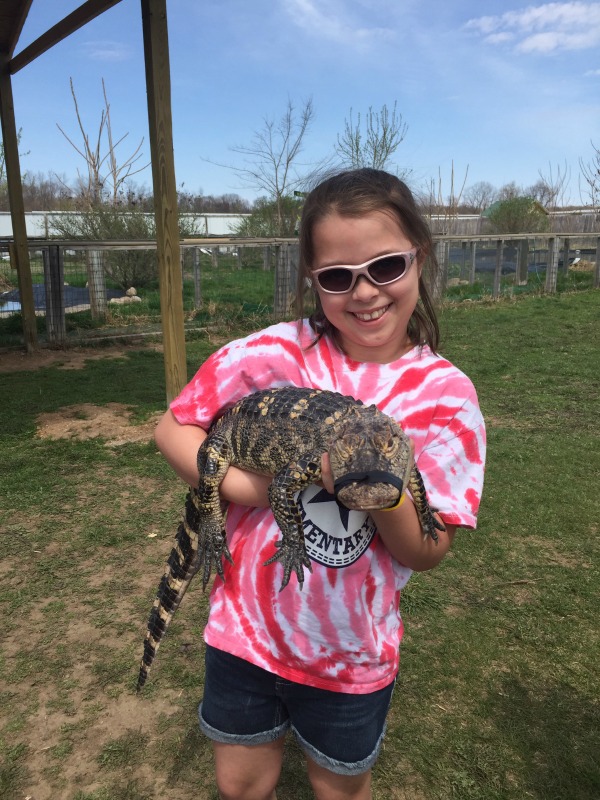 Almost immediately upon getting there, Bella had an alligator in her arms. Like dogs, we found that if you gently stroke gator under it’s jaw or even on the top of the head, it will close their eyes and go to sleep. But don’t loosen your grip. This particular gator was storing up it’s energy to try and wiggle out of Bella’s arms! She got whipped by the tail a couple times, but she said it didn’t hurt. I don’t think she would have admitted if it did, though!

Every gator (accept Godzilla…you’ll see him in a bit) is brought out of the greenhouse and set on a table. The kids then take various size brushes and scrub all the dirt off the gators. Once they are clean, the gators are measured (head length, full body/tail length, and tail length). Next they are checked for a microchip. If they don’t have a microchip, one is put in. 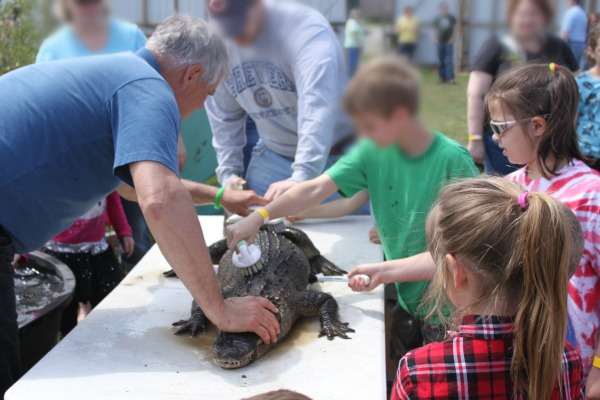 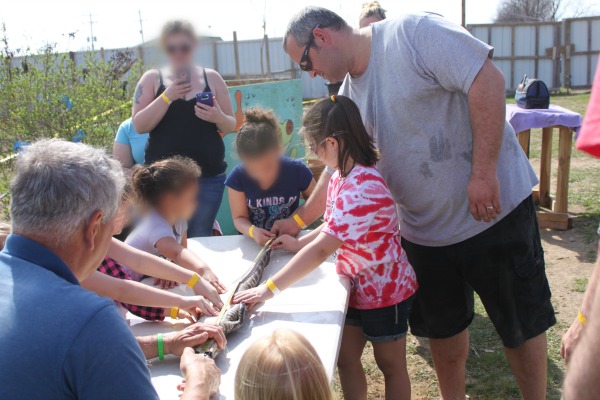 The one gator that Bella has talked about ever since our first visit was Godzilla. He is their largest gator and they’ve also trained him. Eventually they will be doing shows with him (we can’t wait to go back for that). One of the first things Bella and her dad asked was “will we be moving Godzilla?”. Originally they said no. Mainly because there were other gators in the greenhouse habitat with Godzilla and unless Godzilla moved up to the front of the habitat, it would be too dangerous for them to get him out. Around 3:30 in the afternoon, Godzilla moved right up to the front of the habitat! Bella was beside herself. Here’s a picture of Godzilla in his greenhouse habitat:

Godzilla is estimated to weigh between 350 and 500 lbs. It took seven big guys to carry Godzilla to his summer swamp. I stayed out of the greenhouse when they were moving this gator. The hissing and thought of them dropping this gator, even though his mouth was taped closed, scared me. But it didn’t scare my husband. He climbed into the pen with Godzilla to help lift him out. I made sure to call and up his life insurance policy! Godzilla thrashed around a little bit while they were carrying him and it was quite comical to watch. Even though there were seven big men carrying him, when Godzilla moved, the men were thrown to whichever side Godzilla moved to!

When asked what her favorite part of the entire day was, it was when the owner, Mr. David, handed her a baby gator and told her to walk it over to the elementary pen (this is the area for the smaller, elementary sized/aged gators). Once she got over there, she was able to go into the pen and help release the gator into the water.

Our time at the Alligator Sanctuary was amazing. The staff are all extremely friendly and genuinely care about their gators. They love to share their knowledge about the gators with everyone that is there. They have a lot in the works for the sanctuary and we can’t wait to go back and see it all! Bella even learned about a “Zoo Keeper for a Day” program they will be having and I just know we will be driving back for that real soon!

For more information about The Critchlow Alligator Sanctuary, visit them on Facebook!